In the past hour NASA’s Double Asteroid Redirection Test (DART) spacecraft crashed into a small asteroid called Dimorphos.“We’re using the momentum from the spacecraft to change the orbit of the asteroid.” DART launched in November 2021 on a collision course with Dimorphos a small asteroid 160 meters in size that orbits another asteroid Didymos that is almost five times larger. 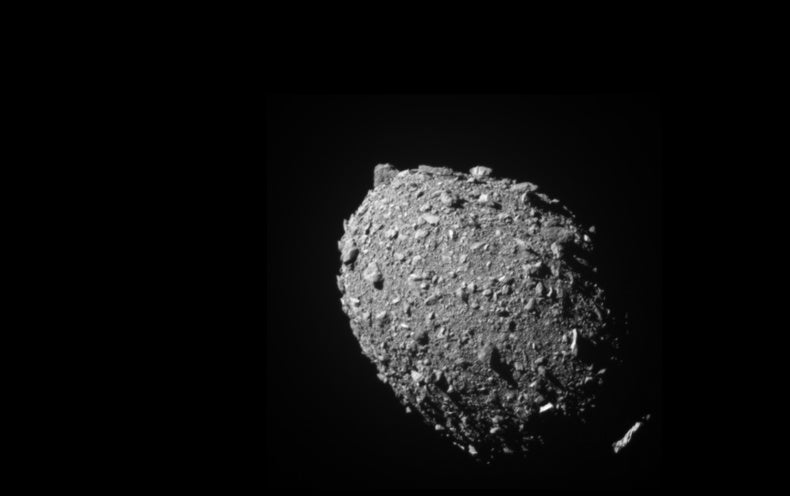 “We’re demonstrating for the first time that if humanity needed to alter the course of an asteroid we would be capable of doing that ” says Harrison Agrusa of the University of Maryland a member of the DART team.Originally called AIDA (Asteroid Impact and Deflection Assessment) the mission would involve NASA’s DART spacecraft and Europe’s AIM (Asteroid Impact Mission) spacecraft which would orbit the target and watch the impact.Scientists wanted DART’s target to be a binary asteroid where one asteroid orbits another because such celestial configurations allow easier measurements of small impact-induced orbital changes.
First found in 1996 that larger asteroid gained its name (Greek for “twin”) following the discovery of a small orbiting companion in 2003 which was later dubbed Dimorphos or “to have two forms.” Following the impact a variety of telescopes including the James Webb Space Telescope and Hubble—and even spacecraft such as NASA’s Lucy probe which is currently on its way to visit asteroids near Jupiter—will track this eclipse allowing scientists to work out just how much Dimorphos’s orbit has been changed.DART hit the asteroid nearly head on meaning it slowed Dimorphos’s orbit.If it had been the change in its orbit could have been barely more than a minute as DART would have transferred only a relatively small amount of momentum to the asteroid.“The weaker the asteroid the larger the crater ” says Sabina Raducan of the University of Bern in Switzerland a DART team member.“We’ve been talking about the need to demonstrate that we can deflect an asteroid for many years.” While