Now engineers at MIT and Shanghai Jiao Tong University have designed a soft lightweight and potentially low-cost neuroprosthetic hand.One volunteer was able to intuitively use the soft prosthetic in daily activities for instance to eat cake and apples and to handle objects and tools. 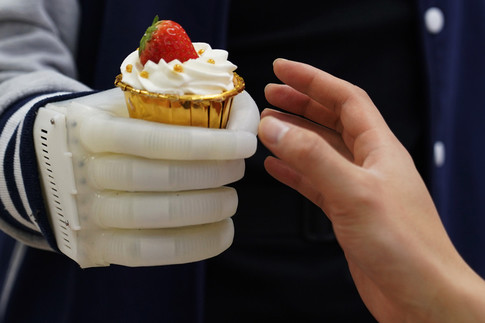 Beyond traditional mannequin-like appendages there is a growing number of commercial neuroprosthetics — highly articulated bionic limbs engineered to sense a user’s residual muscle signals and robotically mimic their intended motions.Now engineers at MIT and Shanghai Jiao Tong University have designed a soft lightweight and potentially low-cost neuroprosthetic hand.Amputees who tested the artificial limb performed daily activities such as zipping a suitcase pouring a carton of juice and petting a cat just as well as — and in some cases better than —those with more rigid neuroprosthetics.
The researchers found the prosthetic designed with a system for tactile feedback restored some primitive sensation in a volunteer’s residual limb.The team’s pliable new design bears an uncanny resemblance to a certain inflatable robot in the animated film “Big Hero 6.” Like the squishy android the team’s artificial hand is made from soft stretchy material — in this case the commercial elastomer EcoFlex.Rather than controlling each finger using mounted electrical motors as most neuroprosthetics do the researchers used a simple pneumatic system to precisely inflate fingers and bend them in specific positions.Using this model the team developed a controller that directs the pneumatic system to inflate the fingers in positions that mimic five common grasps including pinching two and three fingers together making a balled-up fist and cupping the palm.When an amputee imagines for instance holding a wine glass the sensors pick up the residual muscle signals which the controller then translates into corresponding pressures. To test the inflatable hand the researchers enlisted two volunteers each with