The Topic view for WPID=57181 simulated rendering in new page. 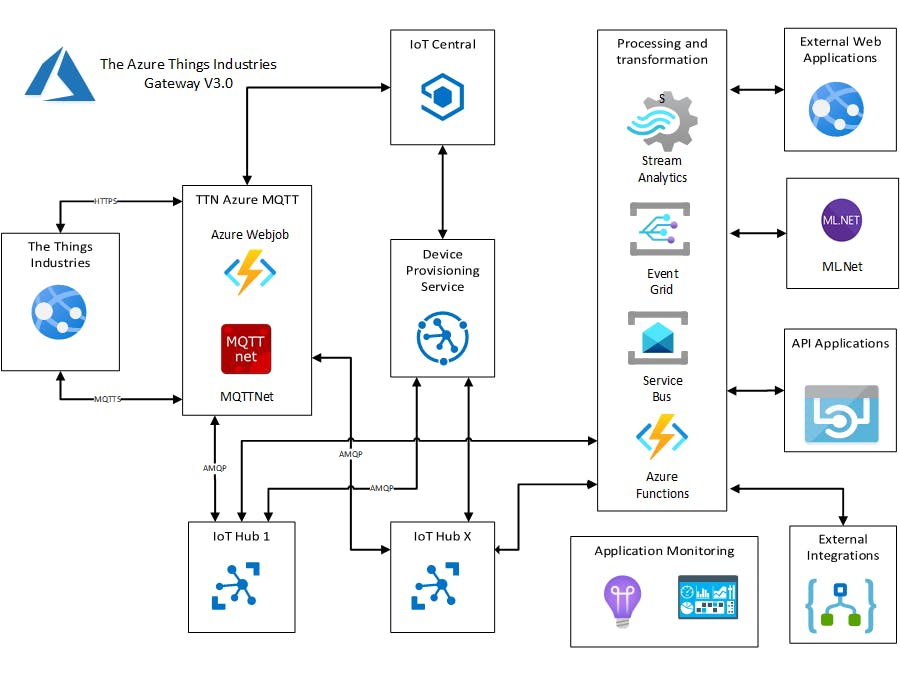 This project is not quite finished I need to stress test the MQTTNet based core and try provisioning 100s or maybe even 1000's of devices add the ability to provision individual devices after the Azure webjob has started add retry code to the Azure IoT Hub Azure IoT Hub DeviceClient make the application easier to deploy sort out The Things Industries(TTI) tenant support extend Azure Digital Twin(via DTDL) support and improve the validation of the app.settings.json file.

The simplest way to connect EndDevices in a TTI TTN Application to an Azure IoT Hub is to use a Shared Access Signature(SAS) Device policy. Azure IoT Explorer downlink message payload and properties A TTI TTN downlink correlation property is used to store the Azure Message LockToken so message delivery progress can be updated. For unconfirmed downlink messages the Azure IoT Hub deviceClient.CompleteAsync method is called when a "queued" message is received by the TTI TTN.

For confirmed downlink messages deviceClient.CompleteAsync is called when an "Ack" is received deviceClient.AbandonAsync (message put back on the Azure IoT Hub device queue) is called when called when a "Nak" is received deviceClient.RejectAsync (message deleted from the Azure IoT Hub device queue) when a "failed" is received. If an Azure IoT Hub message payload contains valid JSON it will be "grafted" into the decoded_payload property of the downlink message otherwise the message body will be assumed to be Base64 encoded binary data and copied to the frm_payload property of the downlink message I have used the DPS with the Connector to provision EndDevices for TTI TTN applications in different Azure IoT Hubs. "Reboot the device now" which has no parameters the Azure IoT Central command message payload contains only an "@" character. "Set the device uplink period to 3600 seconds" which has only a single parameter the decoded_ payload is populated was a single property which has the name set to the contents of the message property "method-name"